...is such a great poet. And I get to see her read tonight! If you're in the city and interested, come to Hunter College (68th and Lex) at 7:30. from What the Living Do:

Johnny, the kitchen sink has been clogged for days, some utensil probably fell down there. And the Drano won't work but smells dangerous, and the crusty dishes have piled up

waiting for the plumber I still haven't called. This is the everyday we spoke of. It's winter again: the sky's a deep headstrong blue, and the sunlight pours through

the open living room windows because the heat;s on too high in here, and I can't turn it off. For weeks now, driving, or dropping the bag of groceries in the street, the bag breaking,

I've been thinking: This is what the living do. And yesterday, hurrying along those wobbly bricks in the Cambridge sidewalk, spilling my coffee down my wrist and sleeve,

I thought it again, and again later, when buying a hairbrush: This is it. Parking. Slamming the car door shut in the cold. What you called that yearning.

What you finally gave up. We want the spring to come and the winter to pass. We want whoever to call or not call, a letter, a kiss -- we want more and more and then more of it.

But there are moments, walking, when I catch a glimpse of myself in the window glass, say the window of the corner video store, and I'm gripped by a cherishing so deep

for my own blowing hair, chapped face, and unbuttoned coat that I'm speechless. I am living. I remember you. 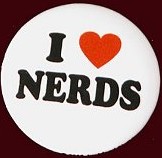 Anybody who gives me one of these has it made...


Hey baby, that's a nice cleavage furrow, how about we introgress? I promise, no incomplete penetrance.

You're must be like a carbon molecule, 'cause every part of me wants to bond with you.

I'm attracted to you so strongly, scientists will have to develop a fifth fundamental force.

You must know Bernoulli's Principle, 'cause damn, you so fly!

You can put a Trojan on my Hard Drive anytime.

Say, isn't that Schoerdinger's Dress you're wearing? I don't suppose there's a chance that perhaps later on I might get to collapse your waveform?

I'm like Schroedinger's cat, because every time you look at me, I die.

I must have a Bunsen burner in my chest, 'cause darlin', my heart's on fire.

I'd like to find the area under your curves.

Dark chocolate has got to be the finest food on earth. Unlike its sweeter cousins milk chocolate and white chocolate, dark gets its oh-so-bittersweetness because it’s made from at least 70 percent cocoa powder. And now—thanks to a few chocoholics who couldn’t stand to give up their favorite treat while taking part in a heart study—researchers have found that just a few squares a day of the dark stuff can halve the risk of heart attack.

Yeah, yeah, I’ve read this already, you say. And it’s true: since the 80s, researchers have known that the “flavonoids” in dark chocolate can reduce blood pressure. But previous studies had only used massive amounts of flavonoids—equivalent to gobbling up several pounds of chocolate per day (which actually might not be all that improbable…..)

Anyway, this new study, released Tuesday at the American Heart Association conference in , studied the effects of smaller, everyday doses of chocolate. Researchers at Johns Hopkins School of Public Health used 139 people who had been disqualified from a much larger study about the effects of aspirin on blood platelets. The larger study had required its subjects to stick to a strict regimen of exercise and a modified diet that did not include caffeine. But these 139 just couldn’t keep their hands off of one caffeinated treat—chocolate.

Though these people had to be disqualified from the larger aspirin study, the researchers looked at their blood results anyway, and found a big surprise: even a little bit of chocolate reduces the time it takes for blood to clot in narrow arteries. But before you reach for the Hershey’s, there’s of course a but: This beneficial effect comes from chocolate’s cocoa, not its (equally tasty) butter or the sugar. So how much can we have? The researchers recommend about 2 tablespoons a day—but only of the dark stuff. Mmmmm.

They totally pegged me... 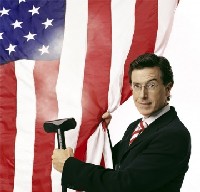 So midterms were yesterday, and with the Dems taking back the House, Stephen Colbert was predictably upset. As he lamented on last night's Colbert Report:

"It's a brave new world, a world where the Constitution gets trampled by an army of terrorist clones created in a stem cell research lab run by doctors who sterilize their instruments over burning American flags. Where tax-and-spend Democrats take all your hard-earned money and use it to buy electric cars for National Public Radio and teach evolution to illegal immigrants. Oh! And everybody's high!"
Posted by Virginia Hughes at 10:30 PM 12 comments:

"Get Your Heart Racing"

Just when you thought Harlequin romance novels couldn't get any, well, racier, they're now introducing a new series "set against the backdrop of the thrill-a-minute world of NASCAR."

For your titillation, here's the synopsis of one of the new books, On the Edge (pictured right):


Unknown NASCAR driver Adam Drake has some of the best moves Rebecca Newman has ever seen, both on and off the track.

But she can't afford to feel anything but respect for the new driver she's hired to pilot her race car. With the financial security of her team hanging in the balance and everyone in the series thinking she's nuts, the last thing she needs is lust getting in the way of logic. Too bad Adam has other ideas.

And the publisher's clever tagline for the new series?