Hello Sequitur fans. Ginny's moved to a new domain, with a much more self-promotional name. 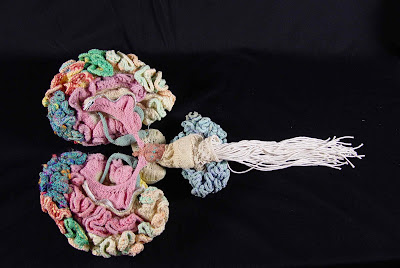 It's accurately knitted. Yes, they're serious.

Another Strike Against the Panspermia Hypothesis

The Earth's oldest ice has been thawed, and its drippings contained fragments of very, very old DNA. Scientists recently brought this DNA back to life.

As he describes in a recent PNAS paper, microbiologist Kay Bidle and colleagues at Rutgers discovered DNA pieces in thawed chunks of Antarctic ice that ranged in age from 100,000 to eight million years old.

When they tried to make the bacteria "viable" again—that is, when they tried to get it to grow and reproduce in lab cultures—the researchers found that the older samples were much more fragmented than the newer ones. From these samples, they calculated a "DNA half-life:" The length of DNA fragments in the ice breaks in half about every 1.1 million years.

They attributed the DNA breakdown to its long-term exposure to cosmic radiation, which digs another nail into astrobiology's Panspermia Hypothesis. The idea, which dates back to the writings of the 5th Century Greek philosopher Anaxagoras, is that the "seeds of life" are found throughout the universe. In 1973, the co-discoverer of DNA Francis Crick proposed a "directed panspermia" theory: An advanced alien civilization, perhaps facing its imminent demise, intentionally spread small grains of DNA in random directions through the universe, some of which landed on Earth.

Panspermia, though an immensely popular idea in science fiction, has been widely criticized in the astrobiology field, mostly because the specific combination of carbon, nitrogen, and oxygen necessary for life isn't found widely in the universe.

Moreover, stellar winds and cosmic rays make space is a harsh environment for poor little traveling microbes. Biddle's latest research seems to support this latter point. As he recently told Nature News: "If you take the speed of a comet and take the distance it would need to travel it would take longer than eight million years to do that. In a comet the DNA would be completely deteriorated."

(For more astrobiology goodness, check out my Master's thesis about the hunt for life on Mars.)
Posted by Virginia Hughes at 10:02 AM 299 comments:

Last week's PostSecret included the postcard at right, which shows an illustration of an Autism Awareness ribbon and reads: "I AM NOT A PUZZLE! I DON'T WANT TO BE CURED."

This brings up an interesting point that I didn't have space to cover in my recent Nature Medicine story about autism and the parents of autistic children who believe the condition was caused by mercury-based preservatives in vaccines. While reporting for the story, I interviewed several parents of autistic children. They fell into two camps: Those who believed that vaccines poisoned their otherwise normally developing children so that they developed the neurological symptoms associated with autism spectrum disorders; and those who believed that their child was born with a set of genes that would have caused autism regardless of whether their child had received a vaccination. At the heart of this bifurcation is a bigger question: Is autism a disease that can, or should, be "cured?"

One autism parent and fellow blogger, Kevin Leitch, says no. Leitch used to believe that mercury in vaccines caused autism, but changed his mind after several years of reviewing the scientific literature. His daughter's brain, he says, is not disease-ridden, but an example of "neurodiversity."

"The idea that shes damaged in some way became fairly repugnant to us," Leitch told me. "We just don’t see her like that. I objected very strongly to the language being used to describe them: poisoned, empty shells, dead souls, toxic train wrecks...You're talking about children here; we cant call them these things."

Another blogger, Autism Diva, has an autistic child and has been diagnosed herself with Asperger's Syndrome (an autism-spectrum disorder). Autism Diva, who obviously doesn't have a hard time accepting that the disorder has a genetic component, had similar sentiments:

"I love my autistic child. How could you think of re-wiring them and making them someone else?" she said. "My child’s very impaired and needs a lot of help. If I left her alone in the world she would die. That’s kind of scary, and I can't see a lot of parents signing up for that. But it's common, it's not a new thing. Not an infection that we all ought to be fighting, it’s a part of humanity. You get on a slippery slope to eugenics very quickly. Is every brain one day going to be uniform?"

This concept of "neurodiversity" is explored in depth—as it relates to autism but also to racism, sexual orientation, and even left-handedness—by yet another blogger, Kathleen Seidel at her website, neurodiversity.com.
Posted by Virginia Hughes at 4:23 PM 11 comments: