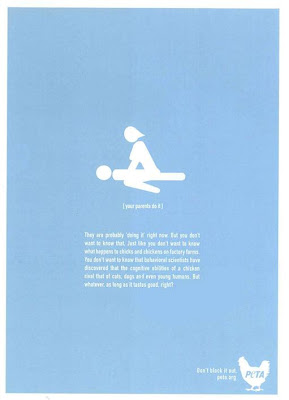 The text, in case you can't make it out under those mounting stick figures:

The text of the ad resonates with me: indeed, if I really thought frequently about how animals are slaughtered, then I wouldn't eat meat. But since I like the taste of meat, I'd just rather not think about those unpleasantries. The problem with the campaign, for PETA, is that this ad doesn't make me think about it more; it doesn't linger. If they're going to take the "guilt trip" approach, then it seems like they should showcase some photo that elicits feelings of guilt: a bloody corpse of a cow, or some other scene out of Fast Food Nation. 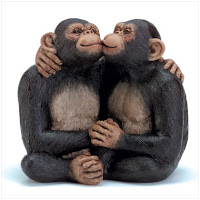 When one human meets another for the first time, we gesture: the Americans shake hands, the Japanese bow, the French kiss. New field research in Mexico finds that when groups of spider monkeys want to avoid gang violence, they hug. Aww.

The monkeys, Ateles geoffroyi, live in large forest groups, but split into much smaller gangs when searching for food. When searching, the gangs will run into each other a lot, and sometimes these encounters turn violent. Other times, though, individuals from different groups will embrace.

In the new study, anthropologist Filippo Aureli of reports that the violent or aggressive encounters were more likely to happen when the monkeys didn’t hug first.

Interestingly, the monkeys don’t embrace members of their own groups, which makes Aureli think that, as he told Nature News, "The embrace could be a way of testing the bond between monkeys, as it exposes vulnerable parts of the body to attack.”

But wait! Wait! We don’t even need to go to to see this behavior in action...

"Evolution" has become a dirty word in many places in America: Kansas (tho we had some good news there last week) and Ohio public school science classrooms, the White House, Fox News studios, my grandparents' Thanksgiving table...and that's all quite disheartening. But at least, I thought, evolution can plead sanctuary in the domain of real science--on college campuses, talks at scientific conferences, and papers published in scientific journals.

Now, apparently, even this latter asylum is under seige. According to a report released last week in PLoS Biology, when medical journals publish studies about things like antibiotic resistance, they avoid using the "E-word." Instead, antimicrobial resistance is (euphemistically, I suppose) said to “emerge,” “arise,” or “spread” rather than “evolve.”

The authors of the PLoS report searched scientific journals published since 2000 for any papers that discussed antibiotic resistance. They then compared 15 randomly chosen articles from evolutionary journals (such as Evolution, Genetics, and Proceedings of the Royal Society of London Series B) with 15 randomly chosen articles from medical journals (such as The Lancet, The New England Journal of Medicine, and The Journal of Antimicrobial Chemotherapy).

The results, in their words:

What does it matter, you ask, what terms the scientists use, as long as they understand the process? To find out, the authors did yet another literature search with the E-word--this time in the popular press. They searched for articles about antibiotic resistance in The New York Times, The Washington Post, Fox News, and the BBC. Then they checked to see if a correlation existed between the number of times the word “evolution” was used in a popular article and the number of times it was used in the original scientific paper that the news report was based upon. And guess what? There was a HIGH correlation (graph at left). As the authors put it:

This clearly shows that the public is more likely to be exposed to the idea of evolution and its real-world consequences if the word “evolution” is also being used in the technical literature.

So bottom line, the E-word is likely to get even dirtier if scientists (or doctors, anyway) skirt around its meaning even within a scientific article. Here's a scarier question: Why does the disparity exist between biology and medical journals? Are doctors actually less likely to "believe" in evolution?! Yikes.
Posted by Virginia Hughes at 7:55 AM 32 comments:

Usually I'd say squid is best viewed after it's been cut into small chunks, fried, and dipped in marinara. But this video gives a new perspective: For the first time, Japanese scientists have filmed Taningia danae, a large deep-sea squid, as it attacks its prey.

As you can see, as Taningia swoops in on its prey (the long fish dangling in the middle), its tentacles give off blinding flashes of light to stun and disorient the target, creating a window of opportunity for the squid to mount its attack. Clever calamari!

The Chinese New Year is Thursday, and it’s the Year of the Pig. Though I love bacon, I’ve never been a big fan of the live porkers. They’re smart, sure, but they ain’t much to look at and spend their days rolling around in the mud.

But according to a bizarro press release that landed in my inbox this morning, swine expert Bruce Lawhorn from the veterinary school at Texas A&M (Texas is the biggest ‘show pig’ state in the country) has apparently taken on the weighty task of piggy PR. “There are a lot of misconceptions about pigs, and it’s one animal people don’t really seem to understand,” Lawhorn says.

The press release continues by listing all kinds of facts to make us love pigs. My favorites:

Intelligence. Pigs are highly intelligent animals and are ranked No.4 in the smart department, behind chimpanzees, dolphins and elephants. “They are considered the smartest of the ‘barnyard’ animals and can be easily trained,” Lawhorn says.

Cleanliness. “People think pigs are filthy, but that’s not really true,” he adds. “Pigs can’t sweat because they have few sweat glands, so when they roll around in the mud, they are trying to stay cool. But in most months, they are clean animals.”

Tails. Not all pigs have curly tails – some have straight tails.

Hearts. Pig valves have been used in human heart operations for years and there are more than 40 drugs made from pigs, among them insulin.

And then, toward the end, to really drive the piggy-cuteness point home, Lawhorn notes:

“Pigs have four toes on each hoof but only walk on two of those toes, often appearing as if they are tip-toeing. Also, pigs can easily get sunburned and have sensitive skin.”

Posted by Virginia Hughes at 9:57 AM 9 comments:

MJ to brighten your day

Be patient through the first 30 seconds. It's worth it.

Man, my wedding party better be that cool.
Posted by Virginia Hughes at 11:17 AM 10 comments: 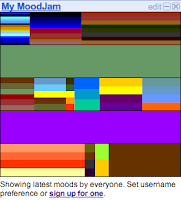 oooo my inner geek is loving the Google Gadget Awards.

The picture here is from My MoodJam--a website created by techies at Carnegie Mellon where users can record their moods with colors and words--which Google deemed the "Gadget most likely to get you a date."

After you register for an account, MoodJam lets you post your moods as often as you like, and then compare your moods with those of other users.

The head developer of MoodJam, computer scientist Ian Li, says he envisioned the gadget as a "visual diary" for self-reflection. But it's also turning out to be (yet another) tool of social networking: more than 2,000 people now share their MoodJam mood choices with family and friends.

To Google: I still don't really understand how using it could get you a date...

....reminds me of one of those Jungian personality tests.
Posted by Virginia Hughes at 10:32 AM 10 comments: 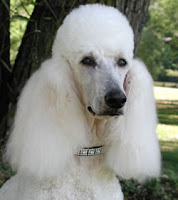 The 2007 Westminster Kennel Club Dog Show is going on this week at Madison Square Garden. (Judging is next Monday and Tuesday, by the way, and tickets are $40, which I might actually pay if someone would go with me...)

In honor of the event, I took an online quiz to determine which breed of dog I'm most like. The test was fun, though I'm not so thrilled with my result: a poodle. Boooo. I would rather be an Akita or St. Bernard or Sheltie. Or a Pug! Anyway, here's their complete analysis (apparently I'm cold and intimidating):


Virginia, you're a Poodle!

No bones about it, you're a go-ahead-and-spoil-me Poodle. Intelligent and discerning, why should you settle for anything but the best? No good reason comes to mind. You appreciate the finer things in life, from the trendiest clothes to the best restaurants. Maintaining your health and appearance is a must — you owe it to yourself to look and feel tip-top. The result? An impeccable fashion sense, perfect grooming, and the latest must-have "toys" and accessories. Unfortunately, that can be a little intimidating to people who don't know you. They might think you're a bit cold or distant. But your close friends know better. Your nearest and dearest can see beyond the glitz and glamour to the smart, considerate person within. Woof!


For more on dogs, check out the NYT Magazine cover story this week about trendy hybrids (with adorrrrrable photos!)

“Goodness is the only investment that never fails.” –Henry David Thoreau

The question is, an investment in what?

Read Montague, a.k.a. The Hottest Man in Neuroscience, is perhaps best known for his research in decision-making. A few years ago, in what became his most celebrated experiments, he scanned people’s brains while they were looking at Coke and Pepsi advertisements and basically found a neurological basis of the former’s powerful branding. Now in this month’s Nature Neuroscience, Montague, my favorite neuroscientist, writes a delicious commentary tackling my favorite subject: the biological (and specifically, neurological) basis of human altruism.

Within the altruism debate—Is it really for the good of the group? Or is it ultimately just a behavioral ploy where the individual expects a reward, eventually?—I’ve always fallen in the latter, cynical camp. Still, until I read Montague’s piece, I had never actually thought about this idea in purely economic terms… he writes:

“Fairness is easy to understand as a kind of economic computation that all socially interacting nervous systems must carry out. Individuals who depend on one another must share if the group is to be valuable to them.”

Humph. I really have nothing more to say about that quote. It’s one of those ideas that I keep reading over and over without being able to fully process.

By the way, the research article on which Montague was commenting doesn’t really answer any of these fundamental questions about the origin and continued presence of altruism in human society. But its results were still cool. Basically, when humans were asked to watch a computer simulation in which money was raised for charity, a brain region lit up that had been previously linked to the evaluating other people’s motives. And since in order to be altruistic you have to be able to distinguish between yourself and someone else, the authors suggest this brain area is also involved in detecting agency in others.

(This “detecting agency” thing has been proposed by various idiots—oops—as something that makes us “uniquely human.” So I can’t wait until they do a similar computer-simulated charity experiment on macaques and find this brain region lighting up in similar ways….)