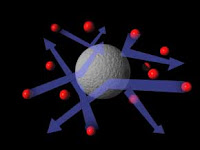 In recent weeks, traveling, editing, and fraternizing with celebs has kept me from updating Sequitur…but a great topic came up the other night when I was out with a cute analyst (and self-described super-geek) who was attempting to teach me basic market theory. Most of it went right over my head, until he dropped a term that I remembered from—of all places—high school chemistry class: Brownian motion.

(Or, if you don’t happen to remember high school chemistry, you might recognize Brownian motion from The Hitchhiker’s Guide to the Galaxy, where Brownian motion powers a spaceship which is actually just a cup of hot tea.)

In 1827, a Scottish botanist named Robert Brown was looking under a microscope at a previously unstudied species of Australian pollen suspended in water. He noticed with great surprise that tiny particles within the pollen grains were “exhibiting a continuous jittery motion.” At first, he thought this movement might be the essence of life itself. But he later found the same jitterings when looking particles of dust. The phenomena was broadcast throughout the scientific community and, though he never proposed an explanatory theory, ultimately named for Brown. (Incidentally, historians now agree that the crude microscopes Brown was using could not have observed these molecular motions. Lucky break for him!)

It wasn’t until Einstein’s famous papers in 1905 that Brownian motion was fully explained: the random, jerky motions were caused by atoms striking the particles in uneven amounts from different directions. (Here's a cool animation of the process.) And Al being the genius that he was, he figured out mathematical equations (or more accurately, probability distributions) to model these motions. Al’s theory killed two birds with one stone: he not only proved the existence of atoms, but also used the motions to calculate the number of atoms in a particular lump of element and how much each atom weighed.

What’s all that got to do with economic theory?!


It turns out that the mathematical models Einstein came up with to describe the random movements of a particle may also describe fluctuations in stock market prices. And here’s where it stops making sense to me. This website seems to have it explained thoroughly, though, if you’re interested.


What’s more perplexing to me is the notion of one set of underlying rules that governs all aspects of our perceived universe. Though I don’t understand why the Brownian motion probability equations work in market theory, I’ll take Mr. Analyst’s word that they do. But whyyy? Why should a physical process—i.e., atomic motion—be governed by the same dynamic as a market based on human behavior?

Brainlova signing off, from the UK. Cheers!

P.S. I read a fabulous book a couple of years ago that I think touches on similar themes: Chaos by James Gleick.