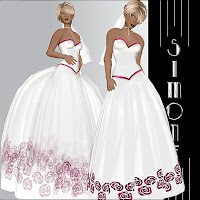 I’m a technology fan, really. Shotgun gene sequencing, faster computers, cars that parallel park themselves…all sweet. But for whatever reason, reading about “virtual worlds”— computer-simulated environments in which human users interact via cartoon avatars—makes me shiver. One of the most famous virtual sets is World of Warcraft, where thousands of players compete against one another, sometimes for months or years, in a weapon-and-token-driven quest to take over the world. These virtual games have taken on lives of their own; on eBay, for instance, real dollars can now buy these virtual tokens.

A piece in today’s Washington Post profiles Veronica Brown, a real person who makes her living--$60,000 a year!—by designing fashions for a virtual world called Second Life. One of her creations is pictured above.


To me, her job in itself is fascinating/creepy. But the Post’s story one-ups even it: Brown’s work is being copied by a “rogue” software program that copies animated objects. Apparently, even virtual entrepreneurs need virtual patents.


As the article explains:

As virtual worlds proliferate across the Web, software designers and lawyers are straining to define property rights in this emerging digital realm. The debate over these rights extends far beyond the early computer games that pioneered virtual reality into the new frontiers of commerce.

"Courts are trying to figure out how to apply laws from real life, which we've grown accustomed to, to the new world," said Greg Lastowka, a professor at Rutgers School of Law at in . "The law is struggling to keep up."

I need to get away from my computer. Right now.

(In the blogosphere: Read what Jake has to say about WoW; or Matthew on the pros and cons of virtual communities. )

Posted by Virginia Hughes at 3:40 PM